New blog is up and running (if a bit bare)

Please head here from now on for reviews, news and a couple of old man rants if I get the time.

As promised, chapters from The Spy with Ezcema. This one's the very start, prologue to give it it's fancy name.

In other news, I'm working on a new book, new website and a horsemeat related blog post. More details as and when.

On the scale of going wrong, this had hit eleven.
Barry had been expecting trouble. Nothing ever went smoothly. But this? It should have been so easy. Break in, explore, and then get out.
How was he to know February the fourth was a sacred day in the Free-Cutter’s calendar? Their annual meeting no less. The Memorial Hall was empty over three hundred days a year, but it was now rammed wall to wall with Free-Cutters.
After entering, Barry and his accomplice, special agent ZX82, had paused in silence, mouths ajar, taking in the oak beams supporting the high roof, the mysterious floor pattern carved into granite blocks and the symbols adorning the walls. Decades, even centuries of historic and sinister meetings oozed from its foundations.
Now hidden in a dark cupboard off the main hall, Barry nervously scratched his arm. He’d been exploring with ZX82 when they heard the front door open. The panic had been instant from both of them. Barry had chosen the nearest cupboard and ZX82 was last seen heading across the hall to the larger cupboard.
One by one, Free-Cutters had entered. A small hole in the woodwork had given Barry a view of the room. There were now at least twenty people mingling about. If asked for a quick estimate, he thought none would be impressed by their illegal entry.
The conversations died down. A single hand clap was heard. Barry’s heart beat faster than he thought possible.
A voice spoke, “Brethren, welcome, by the grace of Ali-Catarri, third overlordum of the Free-Cutters.”
The assembled throng replied en masse, “Verily, we is welcomed.”
Though disgusted by their poor grammar, Barry was spellbound by the power of the voices. He was witnessing something very private. The pieces were finally falling in place.
A different, more powerful voice spoke. “On thus special day, we is bound by the workings of Cumtata.”
The masses shouted, “Cumtata.”
The man continued, “Cumtata, Overlordum of Sepitata. Me offers you the ball of thanks.”
Barry froze, remembering the old, much-used leather football he’d seen earlier in the other cupboard. ZX82’s cupboard. Not usually a betting man, he’d have taken any odds on it being this ‘Ball of Thanks.’ Barry shifted himself around the eye-hole, a Free-Cutter approach the cupboard.
The masses cried, “Ball of thanks,” repeatedly.
The cupboard door squeaked as it opened. The Free-Cutter, naked from the waist up, except for a trilby hat adorned with yellow feathers, looked into the cupboard, saw agent ZX82 and said, “What the fuck?”
Posted by Charlie Wade at 01:57 No comments:

I am absolutely chuffed to announce that Seven Daze is going to be published by Caffeine Nights. Obviously I'm over the moon that it's been accepted and can't wait until the release (which at the moment looks like being the end of May).


In case you don't know, Seven Daze is the story of Jim, an habitual criminal recently released from prison who tries his hand at contract killing. Messing up his first hit, Jim has to somehow find ten grand in a week to pay compensation for the carnage his failure created.


Here is a link to Caffeine Nights' website, they've released many books by writers I enojoy reading and I'm proud my next book will be published by them.


Thanks to eveyone who's helped with Seven Daze, the two people that read early versions of it and others who over the years have helped my writing.

Yes it's that time of year again. The annual Best of Awards. So grab a chair and a drink (though chances are you're already sitting), make yourself comfy (again, if you're sitting then you're probably quite comfy anyway) and read on (which you already are... I'll shut up)

To be honest, I haven't read that many this year what with one thing and another. However, I think it's got to be Stephen King's epic 11/12/63. As ever with his books, it's the characters that make it special, so life like.

Mathew C Funk series at Shotgun Honey, here's one of them if you haven't read them.

Best "What chickens to keep in a zombie apocalypse" blog post

This post from The mighty My Pet Chicken Blog

- Not sure what they were looking for, or how that actually found this site.


Most popular Search Term to reach this site

Off The Record 2 - edited by Luca Veste and Paul Brazill. Second year in a row that an Off The Record has gained this illustrious prize.


Forced by the hand of  Jackie I've been asked to explain the book / WIP that I have been working on recently. Here goes...


What is the working title of your book?

Where did the idea for your book come from?

I had the idea of writing about a contract killer, but things progressed and a very different book came out.

What genre does your book fall under?

Which actors would you choose to play characters in a movie rendition?

I haven't thought about that, but Ray Winstone should be involved somewhere.


What is the one sentence synopsis of your book?

A failed assassin has seven days to repay his former boss ten grand.

Will your book be self-published or represented by an agency?

How long did it take you to write the first draft of your manuscript?

It was written in three stages over the course of a year - it probably took 200 hours in total to do the first draft, with at least twice that amount of time editing since.

Who or what inspired you to write this book (story)?

I wanted to write a crime novel from the side of the villain and not the police. As I say, a slightly different book emerged but it's still from the other side. What I wanted to capture was the effect of a life of crime on someone. The despair and hopelessness as opposed to the glamour that is sometimes seen (especially from programmes like The Hustle)

What else about your book might pique the reader's interest?

Some of the crimes in the book involve the Banking community getting their long deserved comeuppance.


That's all for now on Seven Daze. Hopefully, early next year, they'll be more news about it. Have a good Christmas if I don't find anything to moan about before then.

So, as expected, the Nanowrimo experiment was an abject failure for me. About three thousand words was all I managed, and it wasn't even on one story. It doesn't really matter though, as instead of Nanowrimo I did a bit of Nanoedimo or editing as it's usually known. Seven Daze is in the process of having what I hope is its final edit. Obviously I've given it many final edits before, but this one's it. To find out why I'm editing it again, keep tuned after christmas...


Also, having done a bit of thinking about writing, and it being close to new year's resolutions and all that, I've made the following decisions for the coming year...


1. First of all, next year I'm rewriting the novella Inspector Cliche as a full length novel.

3. This blog will continue to gather tumbleweed as I'll spend less time on it. However, I'm going to set up a proper writing site with proper writing and not just random old man moans.

5. After Inspector Cliche, I'm going to re-write the book formerly known as Spies, Lies and Pies (now called The Spy With Ezcema)

Haven't had any pictures for a while, so here's a pic of our cat looking like it's hogging the remote control. Happy xmas all. 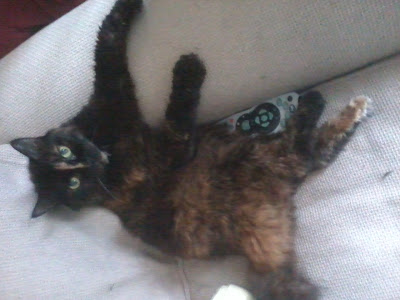 So NaNoWriMo became InNoStarMo, however it's now changed to InNoMiMo or International November Middle (of book) Month. I got fed up of writing starts so I've written a middle chapter that would probably link in with Nano 2.


Britwell had only been there ten minutes and she’d already banged on about chakras and energies. The tea was shit too, some infusion of tree bark and herbs or whatever. He sighed and looked back at the hanging charms and symbols. The place stank. Petuli oil and joss sticks. He knew what she was hiding, what those smells were hiding. If she pissed him off too much, he’d search her.

“Here we are.” She walked back into the room. White, ghost like dress, almost a sheet with three holes cut in it. Hair tied back with some hemp bangle thing and sustainable sandals on her blackened feet.

“I could feel the energies last night in this crystal.” She held up the purpley-blue stone, her eyes piercing his.

“And what did the stone tell you, miss?” He’d tried not to be flippant, but she just wasn’t helping.

“The crystal points to tonight. A farmhouse on a hill. A troubled mind continues by doing all he knows how.” She paused, he reckoned for effect. “The next one’s tonight.”

Britwell rolled his eyes. The killer had drawn out every nut job, crystal snitcher and long haired psychic this side of Taplow. Always the same, always had been. Murderers drew these lot out like a ad in Exchange and Mart.

“Does your stone have any idea which farmhouse it’s going to happen in?”

“Inspector, I sense your bitterness again. Not only is it not good for your energies, but my aura can’t take scepticism. I fear I’ll have to ask you to leave.”

Britwell stood up. “It’s okay, I’m gone. You and your stone’s aura can be at peace now.”

He let himself out. Lighting up a cigarette, he lent against his car before opening the door. Three of them now. Roughly the same age, but otherwise no connection. The random killer the papers were calling him. A bit of fear was always good for paper sales, but they had a point. Without picking some form of pattern or victim, no one was safe.

Inside, the starter motor took three turns before the engine kicked in. He’d have to get that fixed. With his luck, a dodgy starter would come back to haunt him at the wrong time.

Driving off, he pulled out his mobile, rung Walters.

“Another fruitcake. What about yours?”

“Well, he is a very charming man, sir. I can understand why so many go to his séances and shows. It’s quite hard to not believe him when he gets going.”

“It’s all bollocks though, isn’t it?” Britwell held his phone between ear and cheek while he tried to change gear and flick fag ash out of the window at the same time.

“God yeah. He says his spirit guide made contact with the last victim yesterday.”

Britwell shook his head, the phone falling to his lap. Picking it up, he nearly mounted the kerb. “Sorry, missed some of that.”

“I hope you’re not driving, sir? I said he’s made contact with the last victim from beyond the grave.”

“Nah, just stuck in traffic. So I take it he’s given us a full description of the killer and place then.”

Posted by Charlie Wade at 01:52 No comments:

Some short stories can be found below:

A Drill Too Far